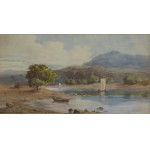 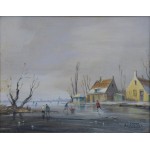 This is a small work in the style of the Dutch Masters. The works displays figures skating on a frozen pond or river in a Dutch village.
Inventory